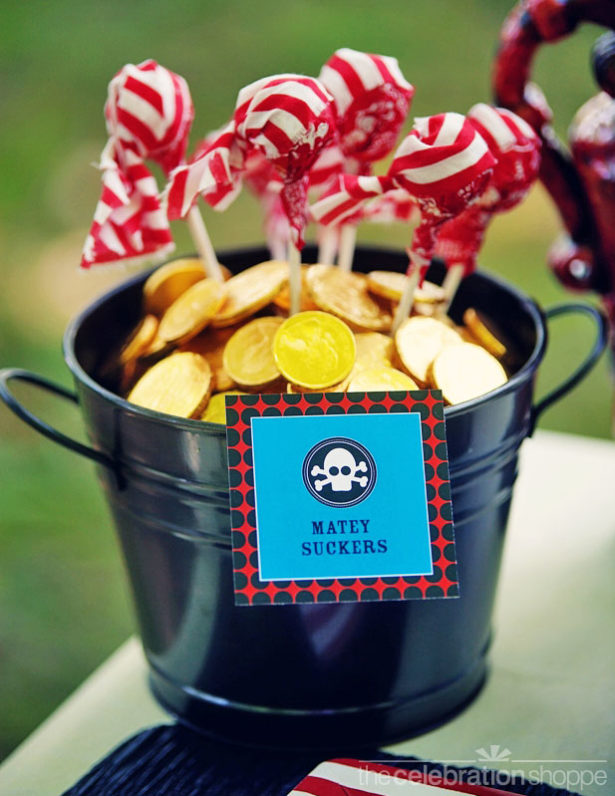 I’ve been waiting a long time to share my new pirate birthday party ideas with you and I’m so excited! My youngest fell in love with the thought of pirates this past Spring, yep, a year ago, when Disney’s Jake and The Neverland Pirates premiered. So in June of this past summer I hosted an “off the hook” (HA! I’m so funny!) birthday party for him.

BUT, just before his real birthday party we had to create a new printable pirate party collection (two collections in the shoppe, pirate ship and pirate skull) to use. And since we were making a new collection that also meant we had to shoot the new collection. So I called my talented friend Angie of Angie Arthur Photography and a few other friends, which I’ll share over the next few days, and I styled a very fun pirate party on the shore of a local lake with ships in the background.

It was an awesomely hot day (pushing 95), but we all survived and the kids did have a ton of fun! I think the sugar helped. {wink} And for my little one (this little scallywag below is Angie’s baby), it was a bit like having a party before the party! 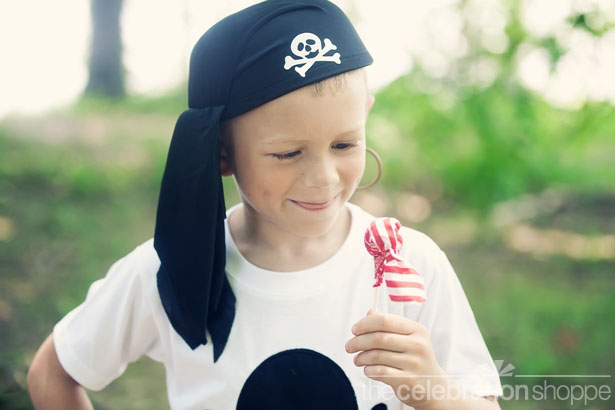 So to start, I’m going to share a very simple and fun pirate party favor idea. I picked up red and white stripe fabric from JoAnn Fabric and Craft Stores, cut it into 2.5″x5″ strips and wrapped it around the top (aka the pirate’s head) of red Tootsie Roll suckers. As you wrap and twist to one side, add a touch of hot glue here and there. The skull cap will adhere to the paper and come right off when the kiddos are ready to eat them!

And if you’re wondering how they all stood up so well in the bucket, I covered a styrofoam ball from JoAnn’s Fabric and Craft Stores with chocolate coins from the candy store.

You can see more of my new pirate party supplies by visiting the shoppe, as well as my blog posts: pirate party photo props, monogrammed pirate t-shirts, pirate ship and pirate skull cookies and more will be posted in my pirate category!

And as always, I hope you’re inspired to craft, bake and create!