saving sea turtles at the beach 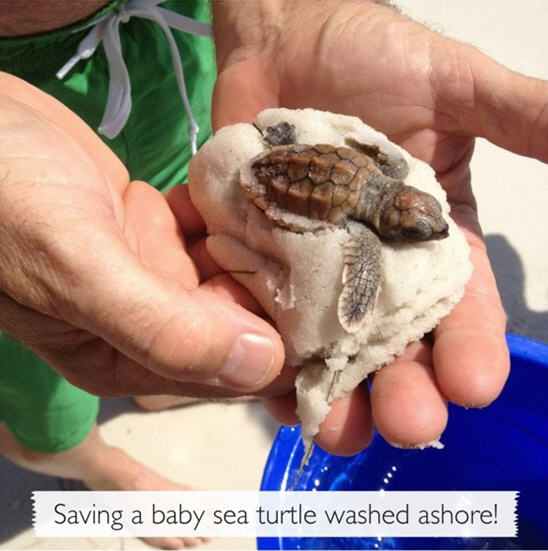 My family is taking a bit of a break this week at the beach. I could show you a million pics of my boys on boogie boards in the ocean, throwing sand on each other or of my husband’s very red feet (they were just peeking out from under the umbrella for too long), but instead I’m going to share this super cute little guy.

There are several sea turtle nests along the beach we’re on and we were really hoping to see them hatch and head out to sea. But instead my son found this little guy washed back on shore. Just think, he made it all the way out (not easy with all the birds scouring the beach) and then he washed back! You could just hear them, like in Nemo, saying “mine. mine.” {eeek!}

My sweet uncle walked him back out as far as he could, past the crashing waves, and let him go, but he washed back again so we called wildlife rescue. They said he was sick so they took him back to the local aquarium to help him get better before releasing him back into the ocean. I sure hope Squirt makes it! {wink}

I’ll be back to our regularly scheduled programming next week with some fabulous Halloween ideas! Happy weekend everyone!